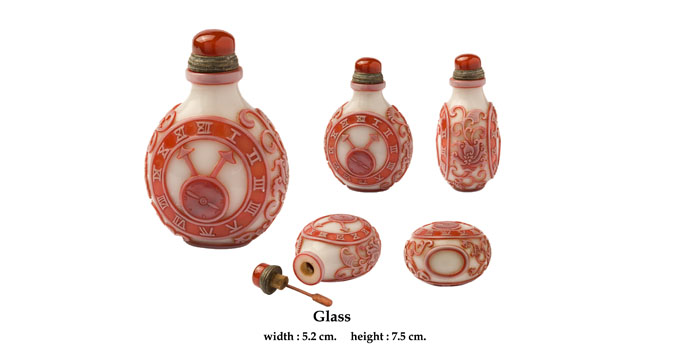 Snuff is made from pulverized tobacco leafs, it is usually inhaled through the nose, the Chinese were using bottles in order to inhale it, each snuff bottle contains a tiny spoon on the stopper to extract the snuff and inhale it. 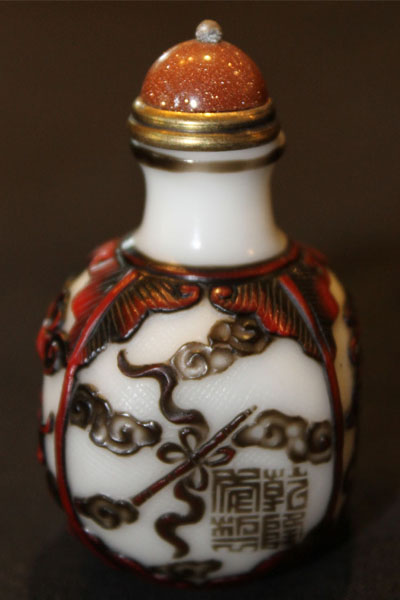 The use of snuff was first introduced to the Chinese during the 16th century, starting as fashion in the upper class, and then spread to all social classes, it was a sign of wealth and position, whoever had the rarest and most beautiful snuff bottle was considered at a higher status.

During the 18th century, in Emperor Qianlong regime (1735-1796 A.D.) , snuff bottles manufacturing was at its peak, when the trend spread to all of china, people has started to greet each other by offering a pinch of snuff from their bottle.

Most of the snuff bottle are made small and are not over few inches as they were made to be held by hand, most of them have a very fine feeling.

Snuff bottles were made mostly from glass, but the material they were made from varied to many different materials such as: porcelain, jade, coral, wood, tortoise shell, gemstones and metals, many of them were decorated with characters, painting, or carvings. 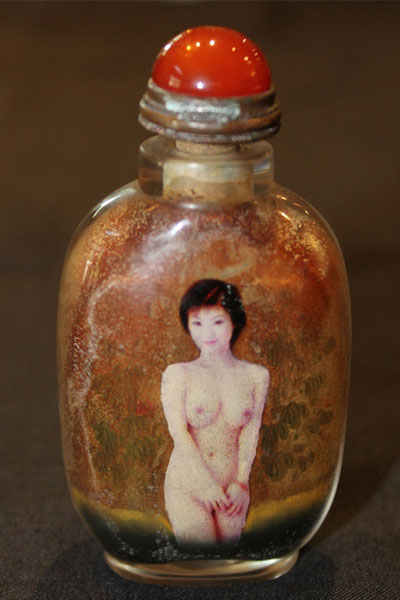 One of the most incredible works is inside painting snuff bottles, those are made from glass, and the artist painting inside the bottle, usually including calligraphy, those painting have to be done by inserting a small brush into the neck of the bottle and create a reversed painting, those kind of bottles are still made today by some talented artist and sold to private collectors, the variety of paintings you can see is limitless, it said that the bests artists of inside painting will produce only few bottles a year, as the work is complicated and time consuming, some artists can create a beautiful inside painting snuff bottle in a month or more.

In the left side you can see an example of a very famous inside painting artist in the collection, this bottle was made by Wang Xisan and shows a nude painting of a lady on one side and painting of bamboo on the other, this snuff bottle is offered for sale.

Today those antique snuff bottle are collected by museums and private collectors and are highly valued, you can see auctions in christie’s, sothebyes and bonhams offering many rare and beautiful snuff bottles from every kind of materials.

Although you have to be careful as the demand for those bottles created a big amount of fakes that fill the market with many kind of forgeries, however the craftsmanship on the antique ones are extraordinary, and shows a very detailed and high quality bottles, since during the Qing dynasty, quality was the main keyword, especially for Chinese officials, it is said in some cases when an artist presented his work to the emperor, if the work wasn’t finely finished, the piece was smashed on the floor in the artist face and sometimes even punishment or worse, even execution could be the result.

press here to see other antique snuff bottles from our collection