Skip to content
Chinese Porcelain
Posted on June 8, 2012 by Admin

Porcelain is a ceramic material, discovered by the Chinese Han people, it is made by heating raw materials, such as: Kaolin (Clay mineral), pottery stones, Feldspars and Quartz.

Those mixed materials are heated in a kiln at 1200-1400 Celsius degrees.

Although proto-Porcelain wares has existed since the Shang dynasty (1600-1046 B.C.), glazed ceramic wares have developed in the Eastern Han dynasty into porcelain.

During the Sui and Tang dynasties (581-907 A.D.), large variety of Chinese Ceramic wares has been widely produced, low fired ceramics and high fired porcelain wares started to be exported to the Islamic world where it was highly valued.

In the Song dynasty (960-1279 A.D.) porcelain manufacture has started to be more organized, and the kiln sites were able to do a massive amount of porcelain, Jingdezhen was established as the main production site for imperial porcelain.

The Ming dynasty (1368-1644 A.D. ) started to export porcelain to Europe, Africa and Asia, in massive quantities and controlled the porcelain trade, in Europe, Chinese porcelain has been of much value and was tried to be copied without success for many years.

Throughout the years of the Ming empire, the designs and structure of the porcelain has been developed, new techniques were developed, The porcelain material has been upgraded, and the Chinese discovered new ways to strengthen it, using high quality clay materials and making glazed bottoms. 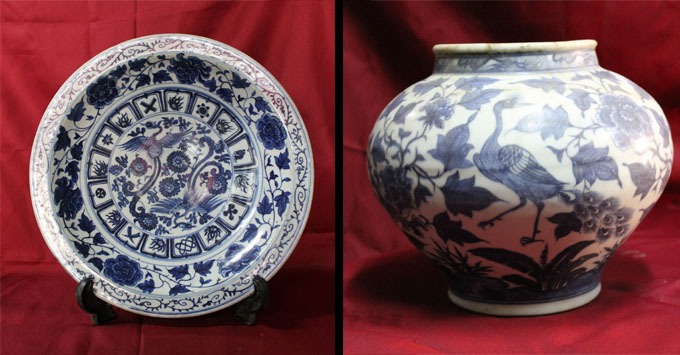 During the Qing dynasty (1644-1912 A.D.) the Chinese have mastered the art of porcelain making, and 90% of the Porcelain that was out of the kiln has been perfect. (During the Yuan and Ming dynasties only 30% of the heated porcelain were coming out as good)